Mount Allison University Dean of Arts and Music Professor Dr. Elizabeth Wells was honoured by the American Musicological Society (AMS) with their Teaching Award for 2017. Wells was presented with the award at the Society’s annual meeting in Rochester, NY on November 11.

Wells received the award for her paper “Foundation Courses in Music History: A Case Study” published in the Journal of Music History Pedagogy in 2016. The article examines Music 1201, a first-year course in music history Wells developed at Mount Allison. First offered in 2003, the course is now a required one for Bachelor of Music students and music majors.

“The course is really like a comprehensive boot camp for listening, writing, and reading about music,” says Wells, who also served as Head of the Music department for several years. “My course, like many, is always a work in progress. The case study sought to examine what music foundation courses could look like. I’m honoured to be recognized by the AMS for this ‘made at Mount Allison’ course.”

The AMS Teaching Award is the only specific teaching award for the Society and can only be won once. Wells was also honoured by the AMS for her research in 2012, receiving the Music and American Culture Award for her research on West Side Story, which was published as a book in 2011.

In addition to AMS honours, Wells was also named a national 3M Teaching Fellow and is a past recipient of the Association of Atlantic Universities Distinguished Teacher Award. She received the University’s Tucker Teaching Award, the J.E.A. Crake Teaching Award, and the Paul Paré Medal for Research Excellence and was also named the Provost’s Inaugural Teaching Fellow at Mount Allison in 2015.

Next fall Wells will visit Skidmore College in Saratoga Springs, NY as the Jusy Tsou Scholar as its scholar in residence. During this one-week residence she will teach classes, meet with colleagues and give a public lecture. 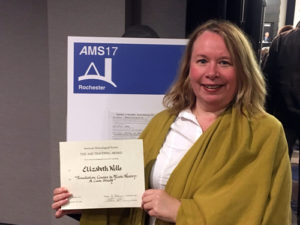